The recent decision to keep to Confederate Monuments temporarily guarding the Dallas Convention Center can be debated by lawyers. These lawyers argue whether a statue honoring traitor to the Constitution and America can be sold. Only in America can this happen.  I prefer not to debate historical facts.

My attention has shifted to the legacy of Juanita Jewel Craft, a beloved Dallas historical figure. Her legacy must be preserved.
As we rejoiced following the vote by the Dallas City Council to remove the Robert E. Lee statue from public spaces, the Juanita Jewel Craft home is slowly disintegrating.  The City of Dallas must take a stand and immediately rebuild and restore. This restoration is not symbolic, it is genuinely historic.
General Robert E. Lee never set foot in Dallas. Juanita Craft protested city government and then was elected to serve her community as a member of the Dallas City Council. Juanita Jewel Craft was a true Texas hero, a heroine who was the first black woman ever to vote in Dallas, the first black woman to serve on a Grand Jury, and a Freedom Fighter who ended segregation.

Juanita Jewel Craft was a liberator, as opposed to those sentinels of slavery, who now watch guard at the Dallas Convention Center. The Dallas City Council has the power and the responsibility to restore Liberty in South Dallas.  Symbolically they must act today. Juanita Craft was our Dallas Statue of Liberty. When she held out her arms, children came to fight for justice, as Craft’s Children for the Dallas NAACP.

When Juanita Jewel Craft held our arms out, presidents such as Jimmy Carter and Lyndon Johnson sat on her porch. The real test of whether a statue or monument should exist is whether it brings people together, rather than dividing people.
Let‘s stand for our monument and encourage the Dallas City Council to rebuild and restore Liberty in South Dallas.  Our Lady Liberty is the Juanita Jewel Craft Home. Let’s get Dallas City Hall to rebuild and restore the Juanita Craft home today.
Ed Gray is a presidential scholar at Southern Methodist University. He is the host of The Commish Radio Show airing Saturdays 3-5 p.m. on FBRN.net, can be reached at eegray62@att.net. NDG was awarded NNPA’s 2018 Robert S. Abbott Best Editorial for Gray’s “Confederate Statues: The White Man’s Burden” column.

A celebration of fatherhood

The Republican Senate, The Filibuster and Racism 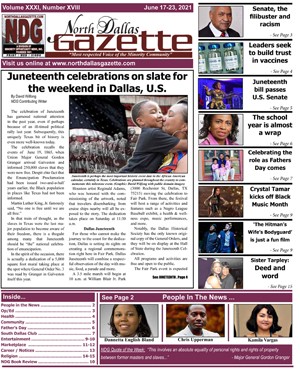 Click to see more publications and cities in the network

While the other minority-based publications focus on South Dallas, there is only ONE newspaper that focuses on African-Americans in North Dallas and the surrounding areas. It’s the North Dallas Gazette, a good choice when you want to reach a true representation of Dallas African-American consumers.